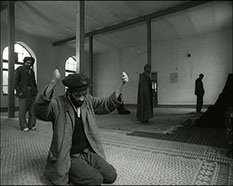 This is the only film made by Forough Farrokhzad, one of Iran's most famous poet's, and is a look at life and suffering in a leper colony and focuses on the human condition and the beauty of creation. It is spliced with Farrokhzad's narration of quotes from the Old Testament, the Koran and her own poetry. The film features footage from the Bababaghi Hospice leper colony. It was the only film she directed before her death in 1967. During shooting, she became attached to a child of two lepers, whom she later adopted. A landmark in Iranian cinema and an influence on the Iranian New Wave. 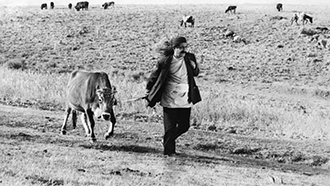 Influenced by Italian Neorealism, The Cow has the beauty and simplicity associated with the great films of that movement. In a small village in Iran, Hassan cherishes his cow more than anything in the world. While he is away, the cow mysteriously dies, and the villagers protectively try to convince Hassan the cow has wandered off. Grief stricken, Hassan begins to believe he is his own beloved bovine. The Cow won great acclaim at the Venice Film Festival after being smuggled out of Iran in 1971, and was twice voted the best Iranian film ever made by a survey of Iranian film critics.

Turtles Can Fly  dir. by Bahman Ghobadi (2004, 98 min., Iran) In Kurdish and Arabic with English subtitles

The film is set in a Kurdish refugee camp on the Iraqi-Turkish border on the eve of the US invasion of Iraq. Thirteen-year-old Kak is known as “Satellite” for his installation of satellite dishes and antennas for local villagers looking for news of Saddam Hussein and the impending war. He is the dynamic leader of the children, organizing the dangerous but necessary sweeping and clearing of the minefields, and then arranges trade-ins for the unexploded mines.